This post originally appeared at Times and Seasons and is reposted here with permission.

I’m grateful for the invitation and excited to participate here at Times & Seasons. The following is a talk I gave in our recent Stake General Priesthood meeting as the newly called Stake Sunday School President. While many of the ideas below were conceived independently, I was heavily influenced by some of Ben Spackman’s writings (especially the quotes) when it came to their final form. Big thanks to him.

I’ve been asked to speak tonight on improving gospel instruction in the home and at church. So much time could be dedicated to analyzing the best teaching methods and the how-to of engaging gospel lessons. However, I will forgo these particulars partially due to time constraints, but mainly because they don’t really get to the heart of the matter. There are plenty of resources provided by the Church that can assist us in improving the mechanics of our teaching. Manuals like Teaching, No Greater Call or Preach My Gospel as well as Leadership and Teaching tutorials are free of charge and available at the Church website. Elder Packer’s Teach Ye Diligently has been a CES staple since the 1970s and is available used and cheap on Amazon. Lesson suggestions can be found scattered all over the Internet, from Mormon blogs to Pinterest.

But I’m not convinced that typical lessons suffer due to lack of skills or quality methods. In fact, I’d argue that most members most of the time are relatively capable in these processes. The problem is that as a Church we’ve become very good at teaching fluff. Elder Holland asked years ago, “Are we really nurturing our youth and our…members in a way that will sustain them when the stresses of life appear? Or are we giving them a kind of theological Twinkie—spiritually empty calories?” These “philosophies of men interlaced with a few scriptures and poems just won’t do.”[1] Feel-good entertainment, warm fuzzies, and trite platitudes should not be confused with edification just as, according to Howard W. Hunter, “strong emotion or free-flowing tears are [not to be] equated with the presence of the Spirit.”[2] In essence, I’m more interested in what and why we teach over how we teach it. Here are few suggestions that I think can help increase the what and why of gospel instruction:

President Hinckley taught, “We live in a world where knowledge is developing at an ever-accelerating rate. Drink deeply from this ever-springing well of wisdom and human experience. If you should stop now, you will only stunt your intellectual and spiritual growth…Read. Read. Read. Read the word of God in sacred books of scriptures. Read from the great literature of the

ages.”[3] This accelerating knowledge includes groundbreaking biblical scholarship along with increasing transparency on the part of the Church regarding its historical documents. Academic and independent presses, including Oxford, Harvard, Greg Kofford, and others, are continually publishing important books on Church history, scripture, and theology. The Joseph Smith Papers Project provides both scholars and laypersons with the original documents and manuscripts of the Restoration, edits and all. Some of this new material has even been incorporated into the Church’s new Gospel Topics essays. These essays attempt to address controversial subjects such as polygamy, the Book of Mormon translation, and the priesthood ban.

In a recent presentation, the head of the Church’s Public Affairs Department Michael Otterson explained, “It’s the intent of Church leaders that these essays be more than just a one-read experience on LDS.org, but rather that their content and principles work their way into the larger tapestry of learning, especially for our youth.”[4] I wonder, however, if we are taking advantage of these materials. We are instructed in modern revelation to “study and learn, and become acquainted with all good books, and with languages, tongues, and people” (D&C 90:15); to “seek…out of the best books words of wisdom” (D&C 109:7; 88:118) that we “may seek learning even by study, and also by faith” (D&C 109:14). In order to understand the scriptures and our own doctrines, we need to be familiar with their historical and cultural contexts. Teaching, No Greater Call acknowledges that it is “helpful to study the political, social, or economic history of the times in which a scripture was given” in order to gain “a better understanding of a particular scripture passage.”[5]

We understandably want to follow Nephi’s example and “liken all scriptures unto us” (1 Nephi 19:23) as he did with Isaiah. However, Nephi largely occupied the same pre-exilic culture and background as Isaiah. Many of the same cultural assumptions and biases pervade Nephi’s writings. Yet, our “likening” can frequently be described as the art of making stuff up. The collective, honor/shame society of the ancient world is incredibly different from the life of a 21st-century American. Cultural psychologist Joe Henrich and colleagues have described our historically unique culture as WEIRD: Western, educated, industrialized, rich, and democratic.[6] We tend to read these values and assumptions on to the texts, wresting the scriptures until their original meaning is unrecognizable. And while we may think that “having the Spirit” is all we need when it comes to reading the scriptures, it might be important to note that Joseph Smith translated the Book of Mormon by “the gift and power of God” and then later hired a Jewish professor to teach him Hebrew.[7] Granted, no one can be an expert in everything. There just isn’t enough time. But if this is the religion we have supposedly dedicated our lives to, perhaps we should reserve more time to learn about it.

Focus on Doctrine First, then Principles and Applications 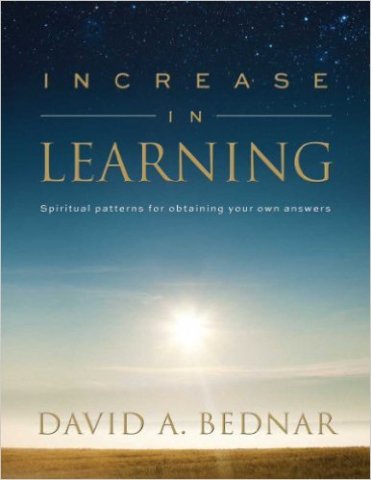 In Elder Bednar’s book Increase in Learning,[8] he distinguishes betweendoctrines, principles, and applications. Doctrines, he explains, are the why: eternal truths that “pertain to the eternal progression and exaltation of Heavenly Father’s sons and daughters.” Principles are the what: “doctrinally based guideline[s] for the righteous exercise of moral agency.” Applications are the how: “the actual behaviors, action steps, practices, or procedures by which gospel doctrines and principles are enacted in our lives.”[9] In his book, Elder Bednar relays his experiences of meeting with thousands of Church members and leaders worldwide. He often asks, “In your living of the gospel of Jesus Christ and in your serving and teaching both at home and in the Church, have you focused primarily on doctrine, on principles, or on applications?” The answer, he points out, is consistently “applications.”

The reasons as to why this is typically the focus of gospel teaching range from the more business oriented (such as “I can control applications”; they are “more tangible”) to preference and comfort (such as “I’m not comfortable teaching doctrine”; applications are easier). In a summary that made me want to clap when I read it, Elder Bednar writes, “I find it both noteworthy and troubling that in the dispensation of the fullness of times…many members are exasperatingly engaged in creating ever longer lists of detailed and disconnected gospel applications.” These “lengthy ‘to do’ lists” receive “disproportionate and excessive attention.”[10] This is why our Sunday School classes at times devolve into stories about two pairs of earrings, condemnations of R-rated movies, or debates over whether Coca-Cola is against the Word of Wisdom rather than, say, the relational nature of salvation and the abiding need to practice empathy and develop deep, meaningful connections with each other. An overemphasis on applications can distort fundamental doctrines and confuse principles and applications as ends in themselves rather than means to an end.

In response to the hypothetical query regarding questions and doubts about “the Church or its doctrine,” President Uchtdorf answered, “[W]e are a question-asking people because we know that inquiry leads to truth. That is the way the Church got its start — from a young man who had questions. In fact, I’m not sure how one can discover truth without asking questions. In the scriptures you will rarely discover a revelation that didn’t come in response to a question.”[11] Intellectual curiosity is the pursuit of truth, which Joseph Smith identified as one of the grand fundamental principles of Mormonism.[12] To ask a question can be an act of vulnerability. In these moments of “uncertainty, risk, and emotional exposure,”[13] we must be very careful not to shame others—especially youth—with the false notion that they are somehow faithless or spiritually lacking for their questioning or skepticism. “One of the purposes of the Church,” said President Uchtdorf, “is to nurture and cultivate the seed of faith—even in the sometimes sandy soil of doubt and uncertainty.”[14] It is true that Joseph Smith saw his own visionary experience as a prototype for the Church and desired his people to experience the same (especially by means of the temple).[15] However, the doctrines of eternal progression and continuing revelation indicate that knowledge is not static.[16] While we should always encourage personal spiritual experiences, we would do well to remember that “to some it is given by the Holy Ghost to know that Jesus Christ is the Son of God” and “to others it is given to believe on their words…” (D&C 46:13-14; italics mine).

Furthermore, we should not mistake intellectual apathy for strong faith. And we certainly should not assume that the attainment of some sure knowledge is the attainment of all. It was Laman and Lemuel who declared, “And we knowthat the people who were in the land of Jerusalem were a righteous people; for they kept the statutes and judgments of the Lord, and all his commandments, according to the law of Moses…” (1 Nephi 17:22; italics mine). This was not based simply on a desire to be disobedient or a refusal to “follow the prophet.” They were following the prophets of Israelite history. They were adhering to traditions and promises laced throughout the scriptures, from the Psalms to Isaiah. They were remembering the Lord’s preservation of Israel from the Assyrians and the fairly recent reforms of King Josiah.[17] Their absolute surety in prior revelations, authority, and tradition led them to see their prophetic father as possibly deranged, if not blasphemous, and caused them to miss out on further light and knowledge. When it comes to this subject, the words of Hugh B. Brown are pertinent:

Our revealed truth should leave us stricken with the knowledge of how little we really know. It should never lead to an emotional arrogance based upon a false assumption that we somehow have all the answers–that we in fact have a corner on truth, for we do not…[C]ontinue your search for truth. And maintain humility sufficient to be able to revise your hypotheses as new truth comes to you by means of the spirit or the mind. Salvation, like education, is an ongoing process.[18]

This outlook is likely why President Brown was known to quote the following from historian Will Durant: “No one deserves to believe unless he has served an apprenticeship of doubt.”[19]

In conclusion, it is worth reflecting on these points. Do we study deeply and broadly or do we use the scriptures merely as “quote books” (to use Neal A. Maxwell’s term)?[20] Do we attempt to understand the scriptures on their own terms and within their own contexts without seeking to Mormonize them? How often do we skip the doctrine of our lessons and go straight for application? Do we confuse application and principles with doctrine? Do we shy away from hard questions or label every challenging bit of information as anti-Mormon? Most important of all, do we love those we teach?

As we go about our lives in the Church, I hope that we may learn to study, teach, and love more deeply.